Matriu_ an installation by Abraham Calero arranged along different spatial axes of the corridor and Espai Cùbic, Matriu_ explores the matrix’s place and fate and the symbolic meaning that it acquires once an image has been printed and reproduced, based on photographs of twenty-two of Joan Miró’s printing plates and on the connectivity of documentary or visual records.

Far from simply reproducing Miró’s work in photographic form, Abraham Calero investigates fundamental issues in the field of contemporary art based conceptually on the links between reproduction and the aura; the real and the spectral; originality and mechanically-produced series; artwork, documentation and storage; and the asymmetrical correspondence among language, images and things (spanning artists and philosophers like Walter Benjamin, Andy Warhol, Joseph Kosuth, Art & Language or Baudrillard).

What symbolic value does an original artwork have in today’s society of image technologies, digitalization, data accumulation and travel? What is selected from the original, highlighted and channelled into the art market and exhibition circuits? What is relinquished or stored away, its code or its « remains »? What did creative processes and synergies represent for Miró, together with failed proofs, the tactile side to copper, the colours and oiliness of inks, and how they are transformed into paper copies and perceived by spectators? Once they no longer form part of the printmaker’s creative process, the plates are catalogued and stored, unused and useless, while the prints are circulated in editions and numbered copies, normalized and contemplated in collections and exhibitions: they are the artworks. An artwork is defined by codification, cataloguing, numbering and archiving - operations inherent in modernity, as Michel Foucault would say. These give it a measurable value, « usefulness » and sense of worth.

In Matriu_, Miró’s original matrixes - now removed from the storeroom - recapture their aura. This occurs in such a way, however, that the matrixes are transformed into museum pieces. Metaphysically illuminated and displayed in an urn that cannot be touched, they have become distant in time, like hallowed archaeological remains or museum pieces, while the place where they are kept can be fuzzily viewed in anonymous style on a computer screen located in the corridor which monitors, controls and computerizes chronological time. It is a digital place, transformed into something unrecognizable by the hazy grey electronic image. Through its loss of colour, a spectral virtual room is created rather than a physical space.

The photographs of Miró’s plates are arranged on the walls of the Espai Cùbic. They are not «doppelgangers» of the originals but photographic interventions of the matrixes. In a bid to recapture their aura, they have been reconstructed during a process of intimate coexistence and the forging of an affective bond in the enclosed space in which they are kept, carefully rescued from oblivion and transferred to the exhibition space. Beside the urn and the photographs, an INDEX on the wall raises the issue of the codification and cataloguing to which printing plates are subject, converting them into abstract references and archival material. The exhibition labels bearing details of the photographs are in photocopy format. They describe the concepts of serialization and endless multiplication, reducing the artwork to data files.

In this way, an installation is formed where different records and processes are juxtaposed, eliciting the concepts of an artwork’s configurations, reproducibility, conversion into a museum piece, and value. At the same time, interconnecting simulations are also made: the opacity of places in an age of transparency; full revelation, the residual and the invisible remains in an age of visibility; and the absence of an original in an age of digital information. The matrix is inaccessible: we see copies and copies of copies, reworked reproductions, indices or ghosts. Reality is not accessed through physical matter, but through visual, topographical and semiotic interventions: screens, images, surfaces, documentation and codes.  Matriu_ does not draw our attention to the recaptured aura of Miró’s rescued matrixes but to its total disappearance, buried and supplanted by a virtual reality. 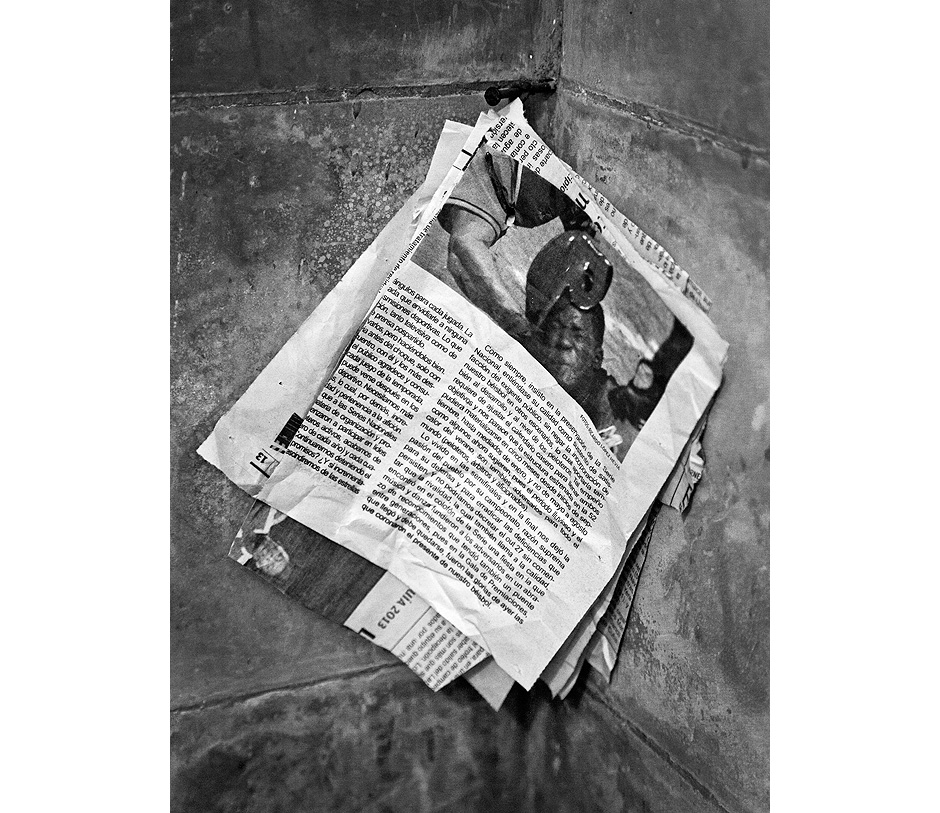 The grandfather of a great woman used to say “gratefulness shows good birth” and I couldn’t agree more. There’s always someone else, besides what’s evident, behind a picture. People who influence the final result in one way or another. People who accompany me, inspire me, influence me or help me do what I can’t or don’t know how to do. People that are there, or aren’t. Melodies? without which this wouldn’t be possible.
So these first words are to acknowledge:

To my family, because they are everything and although they seldom like what I do they’re always there.
To my grandma for being here despite she’s not.
To Xisco for the iron, to Pepe and Bijan for the paper, to Consell carpenters for the wood, to Esteban and Guillermo for the polyester, to Domi and Ruspell for the bikes, to Javier for the wine, to Ton for the toys, to Thomas for the web, to Magi for the bones, to Eva, María and Eduardo for the translations, to Vicente for the light, to Juani for the frames and to Rosa and Santi for the advice.
To those I forget and those who don’t want to appear here.
To the ones who pose for me and the ones who show me who they are.
To the Music.

And of course… to the muse.